LUDI has been invited by the European Commission to take part as exhibitor  to the 2015 annual Conference on the occasion of the Day of persons with disabilities, entitled “Growing together in a barrier-free Europe” (as reported in the conference official document, at page 36).

The event took place in Brussels on 7 and 8 December 2015, in the Charlemagne Building, with more than 300 participants from all over Europe. 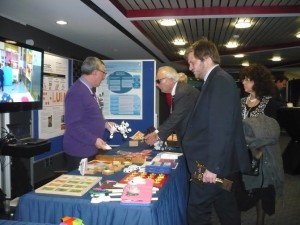 The Action LUDI  has been invited because it highlights the importance of play – as for any other child – in the life of children with disabilities. Actually, LUDI was born within a total inclusive framework and its claim for play as a universal right is intended also to shift the prevailing attention from the side of disease and recovery towards the side of health, well-being, social participation.

To present LUDI to the public attending the Brussels Conference, some members of the network set up an area in the hall where the various branches of the project could be displayed: toys available from the mainstream market were chosen for their characteristics of accessibility and accompanied by information sheets, toy robots developed within research projects, mainstream small robots whose usability is currently being studied, scientific posters related to the activities and the results obtained until now by the four main Working Groups.

The exhibition has attracted great interest in the Conference participants, who wanted to deepen the topic through many questions and new contacts have been established for the future. As some pictures show, children were among the most enthusiastic visitors.

This site uses Akismet to reduce spam. Learn how your comment data is processed.